As some of you may be aware,  there was an arrest during the Boston Critical Mass Ride in May. Below is the story of the arrest in the words of the arrestee. If you'd like to help defray the legal costs associated with the arrest (it could have been any of us!) please send a donation to:

You can also bring a donation to the next Critical Mass ride. Any funds received in excess of the legal costs will be saved for any future costs associated with Boston Critical Mass.

free at last! charges against me have been dismissed on court fees, and
i am now free to discuss the particulars of what was a very bizarre
arrest on the last critical mass. this post will come in three sections:

I was arrested today by Massachusetts State Trooper Walsh while riding my bicycle on Memorial Drive in Cambridge at approximately 7PM. I was later charged with disorderly conduct and refusing to obey a police officer.

At the time of the arrest, I was in a larger group of approximately 100 cyclists known as Critical Mass. We entered Memorial Drive from JFJ park. after coming towards the river from Harvard Square. After bicycling for less than half a mile up Mem. Drive, the trooper passed us on the left with his lights and sirens on. Most of those cycling (in both lanes at the time) pulled over to the right lane to allow the trooper to pass, in case the trooper was responding to an emergency call. Until that point, we had been occupying both lanes of the road, although I was riding in the right hand lane while I was on Memorial Drive.

The trooper pulled to the front of the group of cyclists and exited his car. He began trying, without success, to stop the cyclists who were passing him. At this time I was towards the back of the group, and as I came to where the officer was standing in the road, I slowed to begin talking with him.

I asked him what the problem was, and he told me that we were blocking traffic, and that I needed to move over to the right hand lane. I told him that we were not blocking traffic, but that we _were_ traffic. He was not amused, and insisted that it was illegal for bicycles to ride on Memorial Drive because it was an MDC roadway. (This was not posted on Mem. Drive at the point where we entered the road.) He told us that we should be using the bicycle path, and told me that if I did not move to the right hand lane I would be arrested.

The events that followed involved a few other people who stayed  behind to observe. These people included my wife (who witnessed the entire interaction between the Trooper and myself) and at least two other people who can corroborate my description of these events. Additionally, we have contact information for several bystanders who watched the arrest unfold.

The Trooper spent about 20 minutes dealing with passers-by and others who eventually were not involved in the arrest. All were advised that they needed to disperse or risk being arrested. At this time I was not charged with anything, although the Trooper did mention failure to obey a police officer and "blocking traffic." My wife asked to be able to stay until my fate was decided. The Trooper granted her this, but ordered others to disperse. (He later told her that she would be arrested as well. He continued to say this to the three or four people who stayed near the scene. I remained quiet on the sidewalk until, about 15 minutes later, I asked him what was going to happen. He told me I was going to be arrested.)

Shortly thereafter a paddy-wagon arrived. I was handcuffed and taken to the Brighton Barracks. After approximately 1 hour, I was charged with failure to obey a police officer and disorderly conduct. Bail was set at $25, which my wife (who by that time arrived at the station) gave to me to pay to them. I was out of the barracks by 9:30PM. As I was leaving the Barracks, the trooper admitted to me that he was sorry that I was the one who had to be arrested, that he realized I was part of a larger group, but that he "had to do something."

2) WHAT HAPPENED IN COURT

my first appearance in court was for my arraignment, on May 30 - the monday following the arrest. my lawyer, dan beck, told me that it wouldn't be of that much help to have folks appear at the arraingment, so my wife and i headed alone to the cambridge district court, where we waited from 9AM to 1:30PM just to hear that the district attorney was not prepared to make any real argument at the time, because the state trooper had failed to deliver the police report to the DA's office. my
attorney thought that, given the rather  ridiculous nature of the arrest, there was a strong likelihood that the DA would offer to tell the judge they were willing to dismiss "on court fees" (which means that i pay approx. $100, the case is closed, and no admission of guilt or finding of innocence is recorded). however, without the police report, the DA couldn't make the offer, so the process went forward to my pre-trial hearing, set for june 14.

at the pre-trial, my attorney had prepared (but not filed) motions asking the trooper to identify exactly what my "disorderly conduct" was, and precisely which "lawful order of a police officer" i had violated. neither of these were specified in the report. seeing that 1) the arrest was questionable, 2) we had witnesses ready to testify on my behalf to that effect (thanks to those of you who contacted my lawyer!), and 3) motions were filed that were going to make this a lot of work for the DA's office, the assistant DA agreed, as beck had thought he would, to dismiss on court fees. these were set by the judge at $100.

i would like to speak selfishly first. symptomatic of the nature of CM rides, it seems clear to me that i was arrested both for my own individual actions and for those of the group. the cops really don't seem to have much of a system worked out for "handling" leaderless movements, and this is our strength.

i am calling on that strength now in asking for you to help to support my legal defense. while dan beck graciously slashed his normal fees, i still spent $300 on legal counsel, and another $100 on court fees (as mentioned).

I NEED YOUR HELP TO RECOUP THE EXPENSES. I am suggesting a donation of $10 to help me recoup the costs. there are two ways you can get the
money to me: 1) send a check to the following address:

please include in the memo section, "critical mass legal defense" or some other such remark so that i'll know what it is. sorry, i'm not a 501(c)3, so they won't be tax-deductible. they will, however, support our solidarity on the streets all month AND on the last friday of every month. you can also bring cash or a check to the next ride - we'll pass a helmet around and make an announcement. in the event that we raise more than $400, i will post to this list to decide what to do with extra $. my suggestion is to place it in a savings account, and have it be available for our next run-in with the criminal justice system. which brings me to my next point:

i think it's important to begin strategizing NOW. i was told at the last ride that the state troopers continued to hassle cyclists well after my arrest, and it would not be out of the question for them to try to shut down our next ride. it will be critical to develop a few routes for people to decide upon, ideally some that are more confrontational (i.e. back on memorial drive, or on some other "restricted" roads), and some that are more "cooperative" (i.e. downtown, jamaica plain, roxbury). i
would like to schedule a meeting for NEXT FRIDAY - JUNE 23rd - in the early evening. i can offer the space at my house in somerville, but it would probably be better to have a more central location. amy, could we get the SEIU union hall again? or micha, could we use the Lucy Parsons' Center?

here are some things i think we have to discuss - we could begin on-list:

THANKS - and again, PLEASE help me out on the legal fees - i don't have this kind of money just sitting around 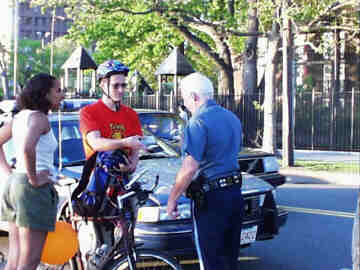